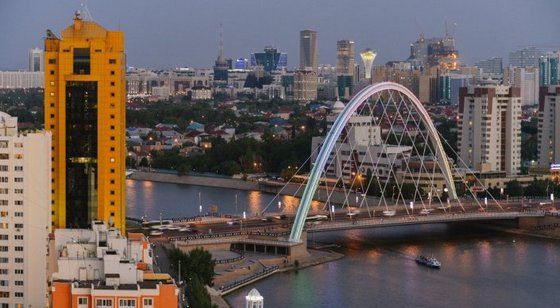 During investment forum of Saryarka district, it became known that gastronomic market is going to be built in the city like Danilovskiy market in Moscow. The project cost is 2.8 billion tenge. According to the chairman of the board of Astana SPK, Nurlan Zhakupov, the market will be located at intersection of 189th Street and Chingiz Aitmatov Street (continuation of Beisekova Street - approx.) in Saryarka district. Planned name of a new object is “Keruen-Global”.

"Here is a sleeping area, population basically goes to the central market for shopping, traffic is generated. To avoid this traffic, it is planned to build such a market so that citizens living in this area do not waste their time," said Nurlan Zhakupov.

According to him, gastronomic market will become the center of attraction in this part of the city. In addition to products and equipment departments, it is planned to establish an entertaining playground. The project will be built by means of private investment. "According to city council, architects and designers eliminate shortcomings," said Zhakupov.

A chain of economy-class Urban Fit fitness centers will appear in Astana in 2019. There must be spent about one billion tenge. Sports centers will be designed for 2 500 people. “This project involves construction of three fitness centers. One of them is in Saryarka district, two are in Esil district. There are many luxurious fitness clubs in Astana, including premium ones. And these will be affordable centers,” said the head of Astana SPK".

Two new football fields will appear in Astana. “Investors have received applications for joint implementation of the project - construction of air football arenas, like the rest of the world. We have already signed an agreement for one project, it is working in Zhagalau-3 microdistrict. Such arenas will allow to play football year-round", said Nurlan Zhakupov. We intend to complete construction in the first quarter of 2019.

Now in "Astana" SPK negotiations are underway on construction of three parking lots. They will be located on the left bank in Esil district: near "Moscow" business center, next to the Supreme Court and "Transport Tower" building where the Ministry for Investment and Development is located. According to Nurlan Zhakupov, now there are five cars per parking space. It is noted that one of parking buildings already has an investor ready to start construction, final approval of documents is underway. As for two other projects they are open to question.

In 2019, it is planned to build a new children rehabilitation center "Zhasa". For its construction, land was allocated on Moskovskaya Street, but there were not any offers from investors yet.

Also next year it is planned to build a hypermarket on Beisekova Street, a chain of petrol stations and information and navigation facilities by the side of the roads. Such navigation billboards are in Almaty on Al-Farabi Street.