Astana is planning to double the inflow of foreign investment per year by 2020. This was reported today by the mayor of the capital Asset Issekeshev at the meeting with members of the European Business Association of Kazakhstan (EUROBAK) and the diplomatic corps. The meeting was devoted to investment and innovative development of Astana. Through direct dialogue, the representatives of businesses have discussed issues related to the development of their businesses in the capital. 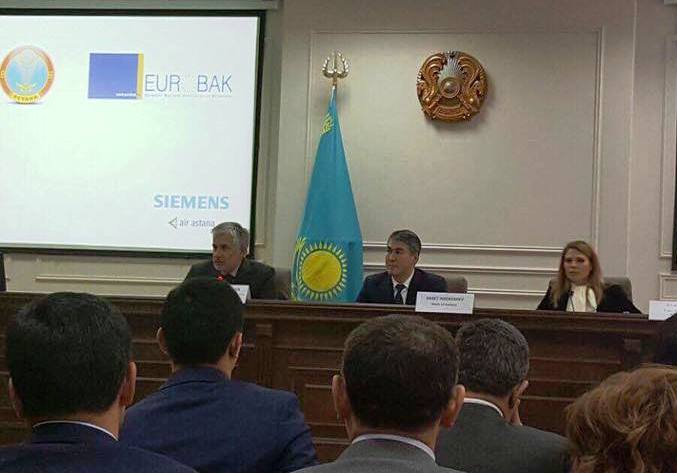 "We are willing to attract investment in development: in the construction of housing, construction of tourist facilities - hotels, restaurants, children's entertainment centers, shopping malls, attracting investments in transport, energy structure", - said Asset Issekeshev.
He also added that Astana is going step by step along the path of urban development. Smart technologies that are introduced in the transportation, medical sector will allow creating a comfortable environment for the population. Innovations will be implemented through public-private partnership mechanisms, according to him.
The mayor of the city gave exhaustive answers to some questions received from the entrepreneurs, as well as instructed the heads of the offices to consider some of other questions.
As stated by the Chairman of the Board of Directors at EUROBAK Audris Barcevicius, the meeting was productive.
"People have got contacts, which is a step to promotion of their businesses in Astana", - he said.
For reference, EUROBAK is a non-profit organization; the association brings together 150 companies, both the world-famous international, European companies and Kazakhstani companies. The main priority of the organization is to create an effective platform for constructive dialogue between businesses and the government.
www.astana.gov.kz
Get E-invitation Book a stand