$2.7 billion out of National Oil Fund to finance infrastructure projects

$2.7 billion out of the Kazakhstan's National Oil Fund accumulating windfall oil revenues is going to be earmarked to finance infrastructure projects, a Tengrinews.kz journalist reports. 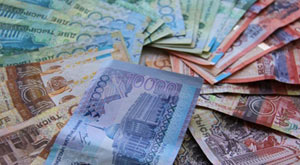 "The time has come for us to rely on the funds to the benefit of the country's people, protecting the nation from the imminent crisis", President Nazarbayev said in his Address to the Nation voiced at the sitting of the Nur Otan Party Political Council.

"The money will help us overcome the tough period and stimulate further economic growth. These resources are for short-term measures only; they will be channeled to develop transport, industrial and social infrastructure, as well as to support small and middle-sized businesses", he said.

He reminded that back in February a decision had been taken to allocate $5.4 billion to support the economy growth, including employment programs for 2014-2015. The money was supposed to be allocated in two tranches, $2.7 billion each.

"To have the launched projects completed and to tackle the most pressing issues, I commission the Government to allocate a second tranche of $2.7 billion out of the $5.4 billion", he said.

According to President, another $549 million should be channeled to provide loans to small and middle-sized businesses and large-scaled entrepreneurship projects in food processing, chemicals, machinery building industries.

To help support the country's banking sector and buy out toxic assets from banks, he commissioned to inject another $1.3 billion into the Stressed Assets Fund by 2015.

Besides, President commissioned to earmark $445 million to complete construction of the first sector of the dry port and infrastructure of the Khorgos-East Gate special economic zone [at the Kazakh-Chinese border], national petrochemistry industrial parks in Atyray and Taraz.

To proceed with construction of facilities to host the EXPO-2017, Head of State commissioned to earmark another $219.7 million in 2015 to complement the earlier allocated $1.3 billion.

"Preparing to host the EXPO-2017, we need to enhance the transport infrastructure in Astana, the country's capital city. We have come up with suggestions on developing the roads network and a high-velocity trolleybus network. The city airport has reached its projected capacity of handling 3.5 million passengers this year. To further develop its potential, I commission to allocate another $159.3 million in 2015 to have a new terminal and have the takeoff runway renovated at the airport of Astana. The measure will enable to bring the capacity of the airport up to 7.1 million passengers a year by 2017", he said.