Brief summary of social and economic development of Astana for January – September 2015.

Astana is the capital of Kazakhstan. According to the statistics department data as of 21 October 2015, the population of Astana comprised 867,790 people.

Industrial production volume within January – July, 2015, amounted to 142.8 billion tenge, and quantum index (hereinafter – QI), as compared to the same period of the previous year, reached 103.9%. Astana holds the third place in the Republic by its QI, after Karaganda (108.8%) and Atyrau (105.4%) regions.

Value of goods produced by processing industry comprised 107.3 billion tenge, with QI being 104.7%.

The volume of goods production has increased in the following industry branches:

During the 1st half of 2015, the volume of goods produced under the implemented project of Industrialization Chart rose beyond 3 billion tenge. Involvement of the planned capacity was within the range of 70 – 100%.

The processing industry labour productivity for the 1st half of 2015 comprised 20.6 thousand dollars/person.

Non-primary goods export volume for the 1st half of 2015 constituted 657.1 million US dollars, or 121.6% as compared to the referent period of the previous year.

In the framework of implementation of the second five-year plan of governmental program for industrial and innovative development of the Republic of Kazakhstan for 2015-2019, the decree of Astana Akimat approved regional Map of Industrialization of Astana for 2015–2019 No. 111-468 dated 03 April, 2015.

In the framework of the regional Map of Industrialization, 4 projects totalling 46.5 billion tenge and creating approximately 772 jobs are implemented. Therefrom within the 2nd half of 2015 it is planned to complete 2 projects amounting to 12.8 billion tenge.

Projects of Map of Industrialization commenced in December, 2015:

The tasks of attracting the beneficial investments are solved by the specially created economic zone “Astana – new city”. It operates as a “free economic zone” engaged worldwide as an instrument for facilitating regional investment inflow.

For the years of operation of “Astana – new city” free economic zone, from 2002 till September, 2015, the volume of investment involved has reached 2.2 trillion tenge. More than 1.6 trillion tenge have been already utilised.

Therefrom, 21 production facilities have been put into operation, 24 objects are under construction, and 13 projects are at the stage of designing and obtaining permission documents.

Volume of utilised investments comprised 90.4 billion tenge.
For the whole period of work (since 2010), the operating companies of the IP have produced goods for total value of 368.9 billion tenge, including 40.8 billion tenge for the 8 months of 2015.

The IP operating companies have paid taxes to the budget in the volume of 32 billion tenge.

The companies have created 2,447 jobs.

By results of 2015, 6 objects are scheduled for launching on the territory of Industrial park No. 1 with total value of 32.4 billion tenge, where after reaching full projected capacity more than 1,500 jobs are expected:

The launch of all implemented projects on the territory of Industrial park No. 1 is planned at the end of 2017.

It is worth mentioning, that the majority of projects are export-oriented after the internal market is full. Nowadays, since 2012 GE locomotives have been sold to such countries as Tajikistan, Uzbekistan, Ukraine and Kyrgyzstan.

At present, there are 79 projects in progress, including residential, administrative, social and cultural objects.

Since 2011 the production entities of administrative and business centre have turned out the goods for total value exceeding 54.8 billion tenge (solar modules, helicopters).

In the framework of the governmental support, the applicants are granted land plots on the industrial zone territory with the necessary infrastructure ensured by virtue of budget funds. Preferential conditions of free economic zone are also provided. Investors are exempt from value added tax on turnover of sales of goods, works and services performed on the free economic zone territory with the aim of construction. Zero tax rate is applied for sale of goods and equipment completely expended in course of objects construction. The investors are free for up to 10 years from rent payment for the land plot on which an object is being constructed.

Besides, the special economic zone area is treated as the territory on which free customs zone regime is applied.

At present, in view of occupancy of Industrial park No. 1 with different projects, the industrial area boundaries are extended –Industrial park No. 2 with the territory of 433.1 ha has been created. Currently the development of feasibility study for furnishing infrastructure is being conducted.

Wholesale volume for January – September, 2015, comprised 11,150.9 billion tenge, or 100% to the level in respective period of the preceding year. 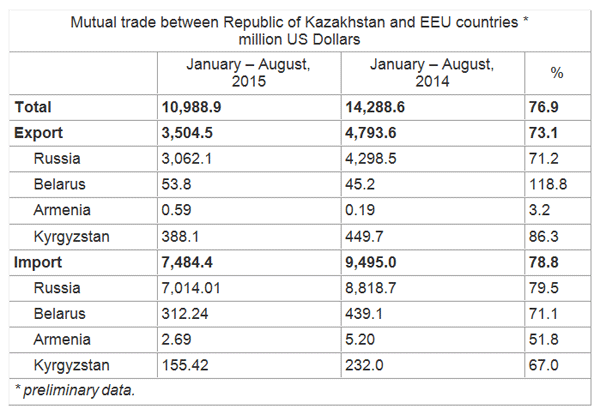 Almaty. 15 October. INTERFAX-KAZAKHSTAN: Statistic committee of Ministry of Economy informed that in January – September, 2015 the volume of construction works (services) in Kazakhstan comprised 1.854 trillion tenge (current exchange rate – 275.99/$1), which is 4.5% higher than in respective period of 2014.

The volume of construction and installation works as compared to January – September, 2014, increased by 8.4%, and reached 1.627 trillion tenge.

Within the reported period 27,636 buildings have been put into operation, 25,960 of which are residential, and 1,676 are non-residential ones.

In January – September, 2015, the total area of residential buildings introduced into service comprised 6 million 329 thousand sq. m. (by 24.2% more as compared with the respective period of the previous year), 3 million 502 thousand sq. m. of which belonged to individual developers.

Average actual expenditure for residential construction of 1 sq. m. in apartment houses in January – September comprised 122.9 thousand tenge in residential houses, in those ones, built by individual developers – 72.3 thousand tenge.

The list of registered legal entities as of 1 October, 2015 included 356,900 records, thus increasing by 1.7% as compared with the referent period of the preceding year, including 347,842 records of companies with number of employees not exceeding 100 persons. The number of operating legal entities reached 217,429. Small companies (with less than 100 people) comprise 208,701.